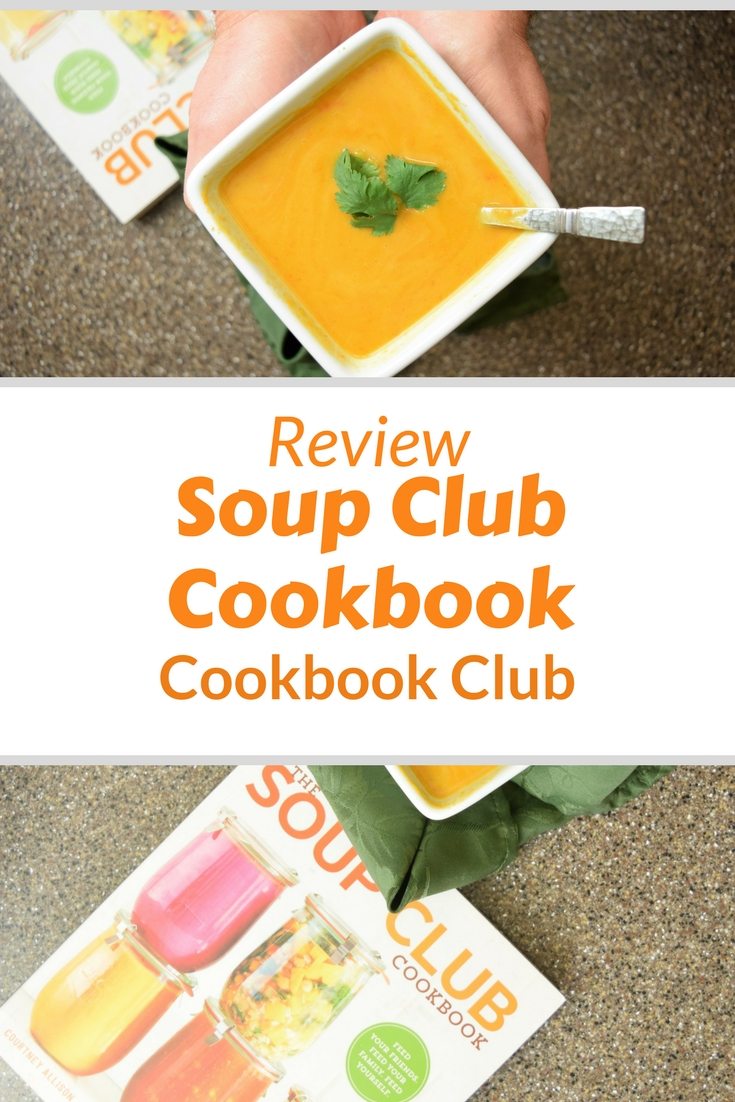 I obsess on soup in the fall and winter months.  So I naturally jumped in joy with our club selection for the Soup Club Cookbook.  To see all the cookbooks we have reviewed check out my pinterst board about it.

This book is built on a premise of women who share soup with one another to ease life’s troubles, commune together and make their friendships stronger.  Our cookbook club has much the same goals.  And of course eating good food.

Soup being so simple to make, most of the time and often easy to freeze some members made several recipes.  But the cookbook isn’t just soup.  There are several side items and snacks and desserts.  We even tried a few of those.  Quoting one of our club member’s husband, “this book isn’t about soup, it’s magic”.  I agree.

It has several soup type sections, then some side items.  We took recipes from several areas to try as always.  But the manifesto at the beginning sets the tone for the whole work. 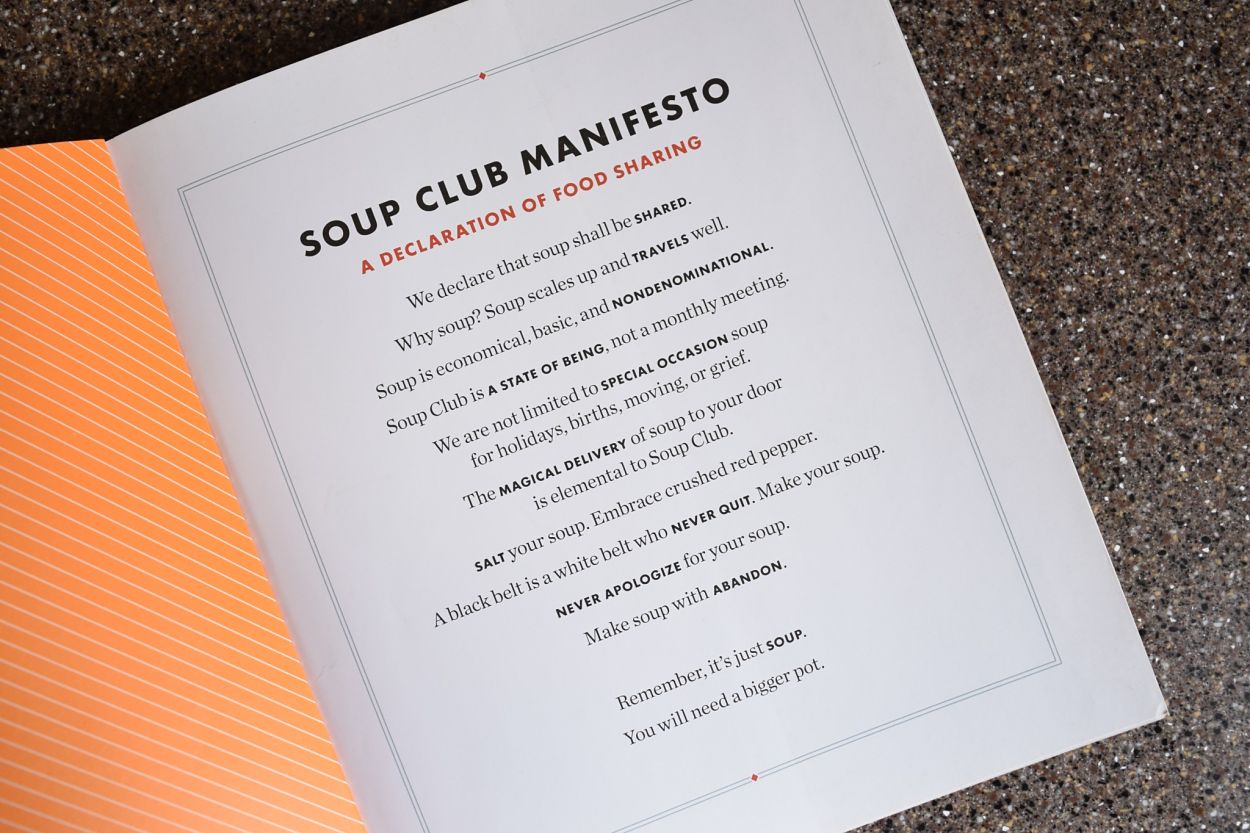 The cooks of this book seemed to like their accouterments.  In fact, they really liked their garnishes and in some cases were necessary to good soup. It’s kinda neat how the recipes have a “for Delivery”  and a “for serve”  section after them.  Helps you decide what you want to do right away and what you don’t care about so much. 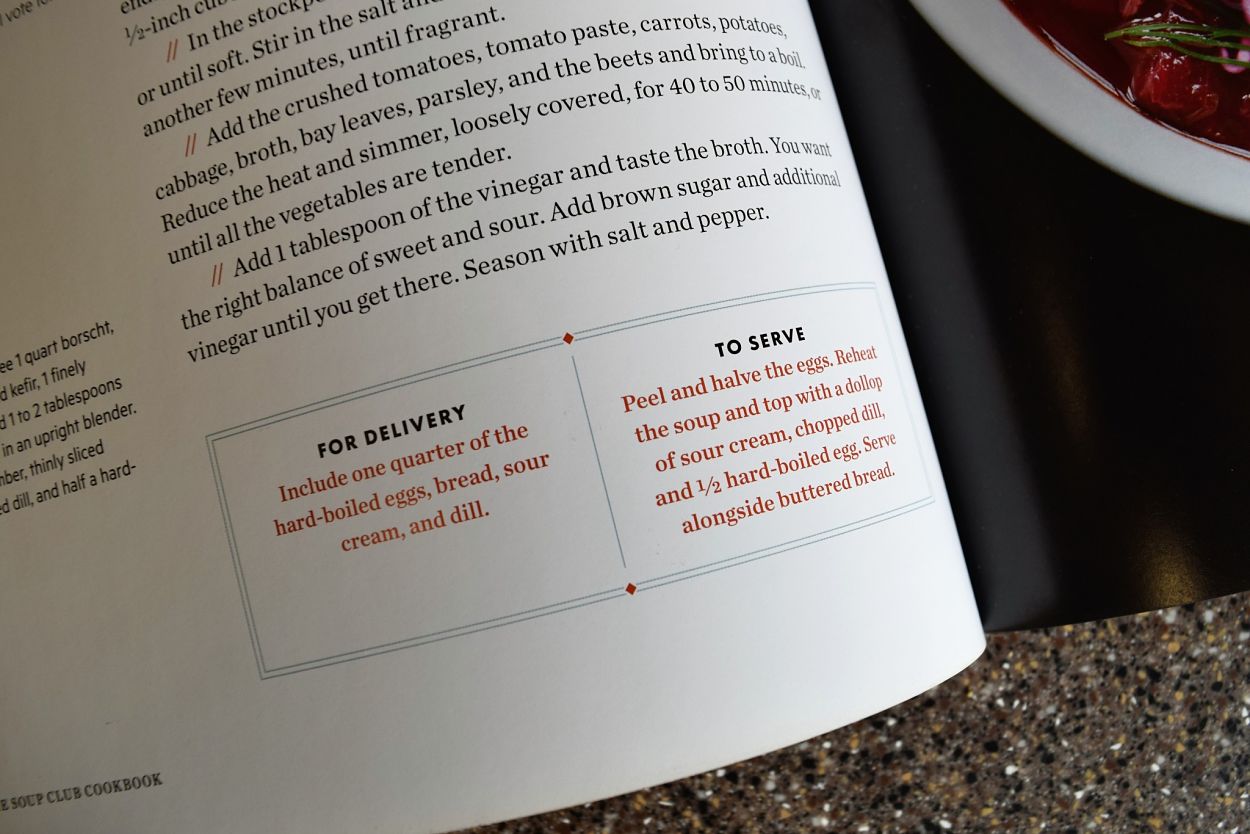 Be warned the recipes are GINORMOUS!!! Each soup recipe makes 8 quarts of soup usually.  This is not your average stock pot recipe.  Several of us had to half them because we don’t own pots that large.  But if you do go for it because soup scales really well and many of these can freeze equally well.  We know, we tried.

I made the Carrot-Coconut Soup.  And honestly it was the least impressive soup.  It required it’s garnishments.  It wasn’t very flavorful otherwise.  But telling you about this should not decrease your interest in the rest of the cook book.  But I was inspired to create my Carrot-Sweet Potato Curry soup, so we thank the cookbook for that.

This was made and frozen then served to us.  It was WONDERFUL and even better with all the garnishes.  You will want to use all the toppings.  My husband hates black beans so I can never make this recipe again (he dislikes about 2 things when it comes to food, so I am willing to comply).  So if you make it invite me over or deliver me some please.

This was a unique one.  We all enjoyed it, but were surprised byt eh sweet nature of the soup.  It requires cobbed corn that you cook and use the water of, it had a succatosh feel to it for me.  But be prepared for a time commitment.  If it is your day to deliver soup, plan ahead.  The masa harina gives this soup a thicker texture than chowder so I personally loved that.  Oh, and heads up you use the corn-on-the-cob water so don’t throw that out.

My family fought over the leftovers on this one.  I didn’t prepare it, but the woman who did was headed out of town and I took it all.  Indian Korma flavors in a soup.  You get way more veggies and delicious flavor.  The garnishes were nice, but not necessary as the spices flavored the soup.  Which I like, because garnishes look nice and enhance, but often I don’t remember to add them to the grocery list.  (though with click and pick up I am remembering more and more). 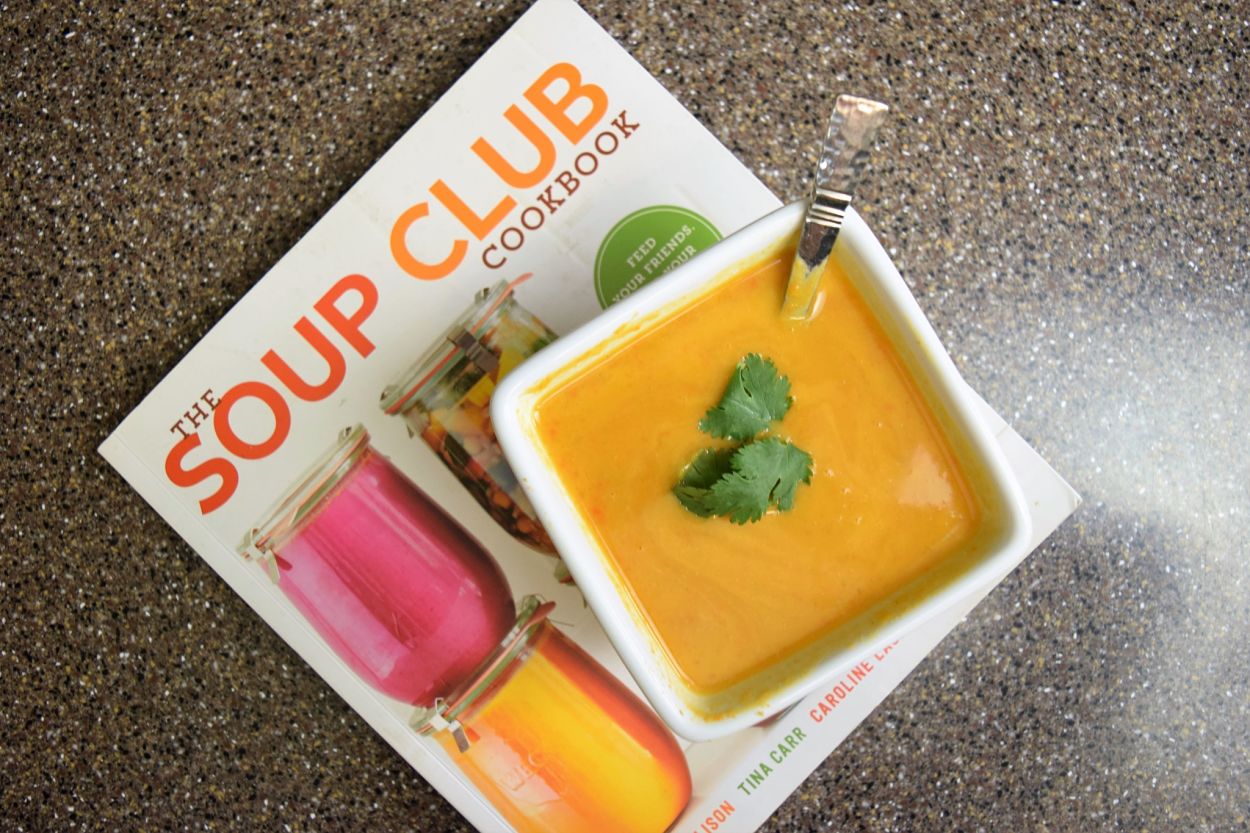 YUM!  YUM! YUM!  The soup has some ginger and that gives it a little essence of heat and warmth that I have never had in a soup.  This is a soup where you wilt some greens in it.  Just an FYI for those with anti-vegetable kids.  But I would way prefer this soup for a get well delivery than jsut chicken noodle soup.  It felt like it would clear my head of anything.

Our resident jewish descendant made this soup to see if it compared well to her Grandmas.  And she said it is rock solid Jewish Chicken noodle soup.  What’s the difference between Chicken Noodle Soup and Jewish Chicken Noodle Soup?  The big difference is you make the broth with the soup.  No adding carton broth here.  Benefit of extra body to the soup and large chunks of chicken.

Don’t confuse this with that flour thing you wrap a burrito in.  This is delicious Spanish recipe of layered potatoes with egg holding it all together in a fluffy masterpiece.  I enjoyed eating it, but am unlikely to make it.  The recipe isn’t hard, but given a choice I am making the soups.  But the recipe is low ingredient numbers and makes a nice size “tortilla”.

A small sampling of these were brought and we all wished there had been more.  They were this unique combo of sweet and spicy.  We all agreed we might be giving these to each other as neighbor gifts next holiday season.  The recipe is simple and you can serve them with many of the purreed soups.