Inside Out Press Junket with the Filmmakers #InsideOut 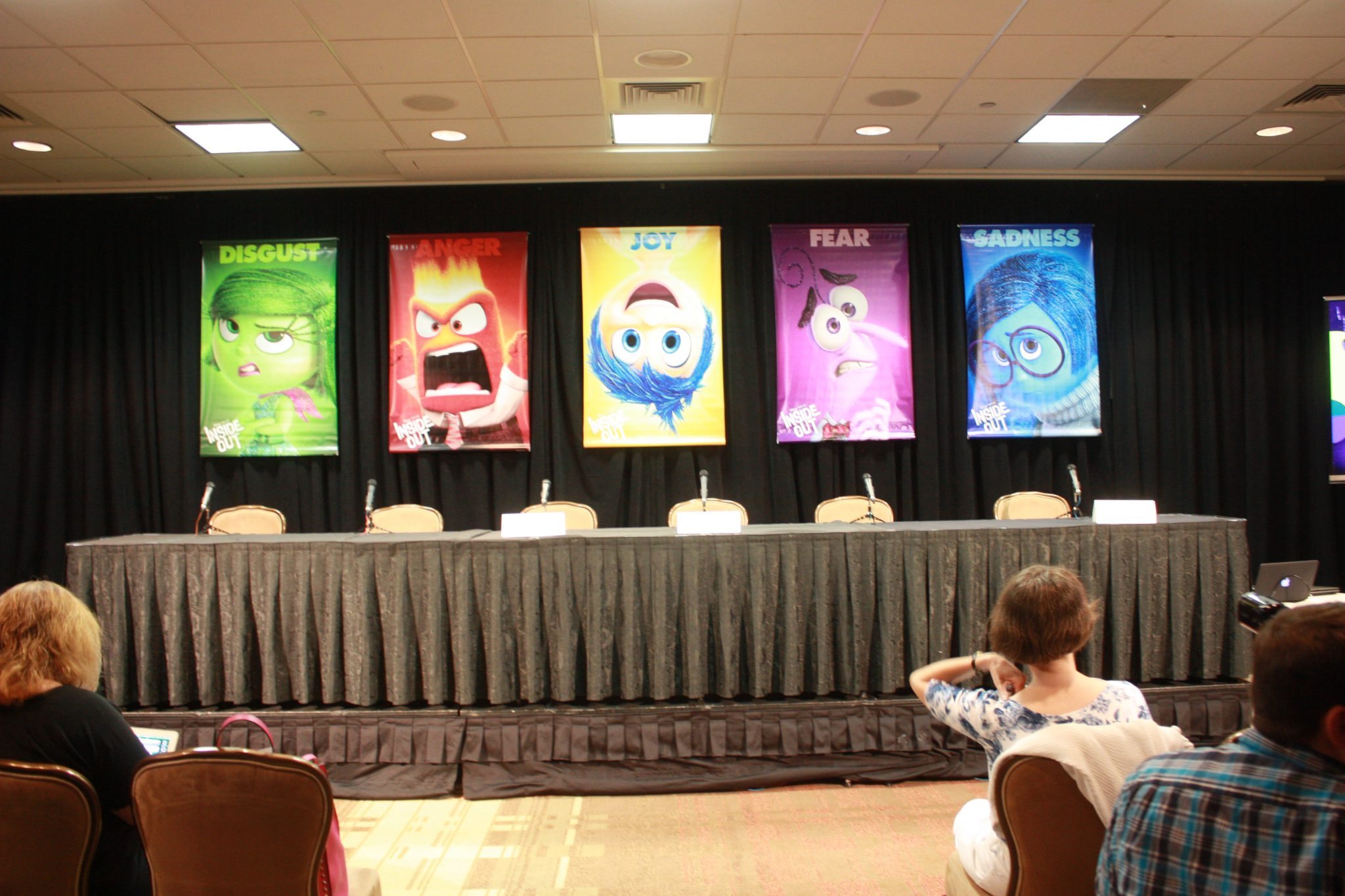 I recently had the opportunity to attend the #InsideOut Press Junket after screening “Inside Out.” Talent attending the most recent press junket were as follows: Director Pete Docter, Producer Jonas Rivera, and cast members Amy Poehler (Joy), Bill Hader (Fear), Mindy Kaling (Disgust), Phyllis Smith (Sadness), and Lewis Black (Anger) all gathered to discuss everything Pixar, emotions and everything in between. But, we’re only going to discuss the filmmakers in this one, since they were the first part of the press junket.

Do you want to meet the little voices inside your head? I wasn’t sure how I felt about it either. The inspiration for #InsideOut according to Pete Docter, “Well, I noticed my daughter growing up, being a little less goofy and wacky and funny and a little more shy and quiet because she had turned 11. And at the same time, I was looking at different ideas for a film and thought about emotions as characters.”

Pete Docter then states, “So the basic pitch that I gave to Jonas at first, and then ultimately John, was, “What if we have an 11-year-old girl who’s moved across the country, but she’s actually not the main character; she’s the setting, because inside her head are her emotions that help her deal with everyday life?”

As a father and with Father’s Day coming up, something Pete Docter said touched me. “I think the other thing that affects us is we’re trying to put our own life experiences up on the screen. I don’t think there’s been anything that has impacted me near as strongly as having been a parent. And so that experience just continues to inspire and challenge and move us in ways that everybody can resonate with.”

Because I’m kind enough to not divulge spoilers before you’ve seen the movie, I’m going to do my best to discuss the press junket for #InsideOut without revealing too much.

Jonas Rivera talks about how he grew up at Pixar. He’s been at Pixar for 20 years and Pete Docter has been there even longer, and he tooks us all the way back to the first “Toy Story”, and he states that he’s surrounded by really cool and talented people. When asked about if Pete and Jonas pitch a new movie together as a team he had this to say.

Jonas Rivera: And I think, as we talked and started to work together, even back on Monsters, we were sort of craving a similar movie, which was completely different, whatever it was, different than the movie we did last.  That was something we talked a lot about.  And even finishing the film, Up, which came out six years ago, the very first thing was, like, “How can we do something completely different than that?”  We’re very proud of that, but it is always about character and emotion and that feeling.

Beverly Hills, CA – June 7 – INSIDE OUT Press Conference with director Pete Docter and producer Jonas Rivera moderated by Scott Mantz.And so I don’t know.  We don’t sit around consciously going, “All right.  Let’s make a great movie.”  I mean, we hope that happens, obviously, but I think it’s just like, “What do we wanna see?  What did we love seeing when we were kids?  What do we wanna take our families to?  What are we gonna be proud of?  Let’s aim for that.”  And I’m lucky.  Pete thinks them up.  I just have to figure out how to make them.  And so I feel very honored that this is my job.

Pete Docter: I think we have similar tastes and different but complementary skills and a mutual respect for each other and what each other brings to the show.  I feel like, man, I can’t see how I could be able to do these without Jonas, and I don’t know if you feel the same way, but I think it’s been a really great relationship.

So, Pete Docter was asked about the casting of the emotions and why he found each person cast suitable to those emotions. Lewis Black being cast as Anger was actually quite comical and he actually teased Jonas about it when he called him. He said, “Great, real stretch casting guys, brilliant.” He even mocked them for calling him a little bit.

With Bill Hader being cast as Fear, they’ve both been fans of his from “Saturday Night Live” but, Bill is a huge fan of Pixar. Pete and Jonas didn’t know that until he showed up at Pixar one day. The casting director called and told them that Bill was in the atrium and asked if anyone wanted to have coffee with him. Both gave each other the socked looked and when they went down there Bill was drinking coffee by himself. Bill knows more about movies than anyone according to Jonas, he even knew who Ralph Eggleston was. He’d watched everything and knew everybody.

Jonas Rivera had this to say about Bill Hader: And we just fell in love with him.  And he came on to write with us actually because he’s such a great story − he’s a great writer, and he was so much fun in the story room.  And we just went through the script, and he started developing voices, and he kind of leaned towards Fear, and he was kind of perfect at it.  He really brought this sort of − I don’t know − Don Knotts, sheriff of Mulberry, like, quick turn on a dime that made us laugh, and he fit.

Casting Disgust they struggled with because they didn’t know if she should be disgusting or disgusted. Once they arrived at disgusted, Mindy’s voice came up. Pete said they asked Mindy, “Do you have any other ideas for this?  Go ahead and play around.” She would come up with different lines and asides and added a ton to the character and the film according to Pete.

Sadness was actually going to be a male character in the original versions. As the film went on, they realized that they had way too many guys in the movie, especially if was taking place inside of a girl’s head. That’s when Jonas chimed in. Jonas saw Phyllis Smith in “Bad Teacher” and she was just so funny. Jonas looked at Pete and said, “I think hesitant was what – because you had written her more like a crybaby” and Pete confirmed that. Jonas commented on how her always crying was funny, but that in “Bad Teacher” she was so hesitant she couldn’t even order a sandwich. Like, “I’ll have the chicken sandwich? Everything was a question and it felt right and it worked. That’s how they ended up playing Sadness in “Inside Out” and I’ll have to agree with Jonas, that Phyllis straight up nailed it!

And, FYI she is my favorite. And…I GOT TO MEET HER! As my friend Desiree and I were leaving the press junket, I was star struck. I’m Disney Bound as her character, as in blue eye shadow up to my eyebrows, Disney Bound. I’m dressed like Sadness. And, there she was standing in front of me.

I look at Desiree and I’m like that’s Phyllis, like Phyllis from “The Office” Phyllis, Phyllis. I’m pretty sure I said her name like one thousand times. FYI I work in this industry and I don’t get star struck ever. I mean ever. My daughter Disney Bound as Phyllis during the screening. We all love Phyllis. The whole family was excited when I posted the selfie, but best of all she’s truly so very nice. She didn’t have to take a photo with some fan and she did. I love her even more and I told her how she’s my daughter’s favorite actress in the movie and she asked me how old she was. I mean, she genuinely was interested in what I was saying and I was of course, star struck and I’m not even sure I spoke clearly. LOL I might have said “Inside Out” better get an Oscar and I’m pretty sure it’ll surpass “Frozen”. Totally the highligh of my

Last but, not least they needed to cast Joy. She was the most difficult because she was so joyful it’s annoying. When you write a character that’s always perky and happy and full of life, you know and I know you’re gonna wanna deck them by the end of the day. Joy is pivotal to “Inside Out” and Amy was able to put that in a way that made it entertaining and not insufferable. You can’t help wanting her to be joyful and finding yourself rooting for her to be Joy. Definitely the only character I’ve ever known that I’ve not looked like with disdain that they’re always chipper, upbeat, perky and happy. Nonstop! LOL

Someone asked Pete and Jonas how in Disney’s “Big Hero 6,” San Francisco was like San Francisco 2.0 and in  “Inside Out’ it’s definitely not so wonderful. They talk about that how to Riley it wasn’t what she expected leaving her friends and moving. I can’t say anymore without giving things away. But, know that it’ll all make since Friday. 🙂

The talk about “Toy Story” and that November 22nd marks the 20th anniversary of the movie that started it all. When they asked them if they could give us an update on “Toy Story 4” Pete said, “No.” Jonas said, “I was gonna say there are toys in it.” HAHA

“Inside Out” comes to theaters on June 19, 2015. If you don’t go to see it, you’re embracing Sadness. And, let’s not be sad. Let’s be JOY! Go, go, go see it! My next post will be about the “Inside Out” Cast Members and Director Jim Murphy and Producer Andrea Warren about an adorable and loving short “Lava,” which is playing before “Inside Out.”

Visit INSIDE OUT on Tumblr: http://insideoutheadquarters.tumblr.com/