Inside Out Press Junket with Cast of Emotions #InsideOut

And as they brought out the cast of “Inside Out” they said, “Don’t be sad, please welcome Phyllis Smith; got nothing to be afraid of for Bill Hader; could you have asked for a better Joy than Amy Poehler; you won’t like him when he’s angry but you love him anyway is Lewis Black; no Disgust here for Mindy Kaling. As you all can tell, we all love this movie so much – one of Pixar’s very best and to celebrate the 20th Anniversary of the movie that started it all – which was Toy Story – that came out November 22nd 1995, amazing. What was it like for you all when you read the screenplay to wrap your head literally around the scope of what was going on in this movie? Let’s start with you Phyllis.”

Phyllis Smith voice of Sadness from Pixar’s “Inside Out” is just absolutely lovely. 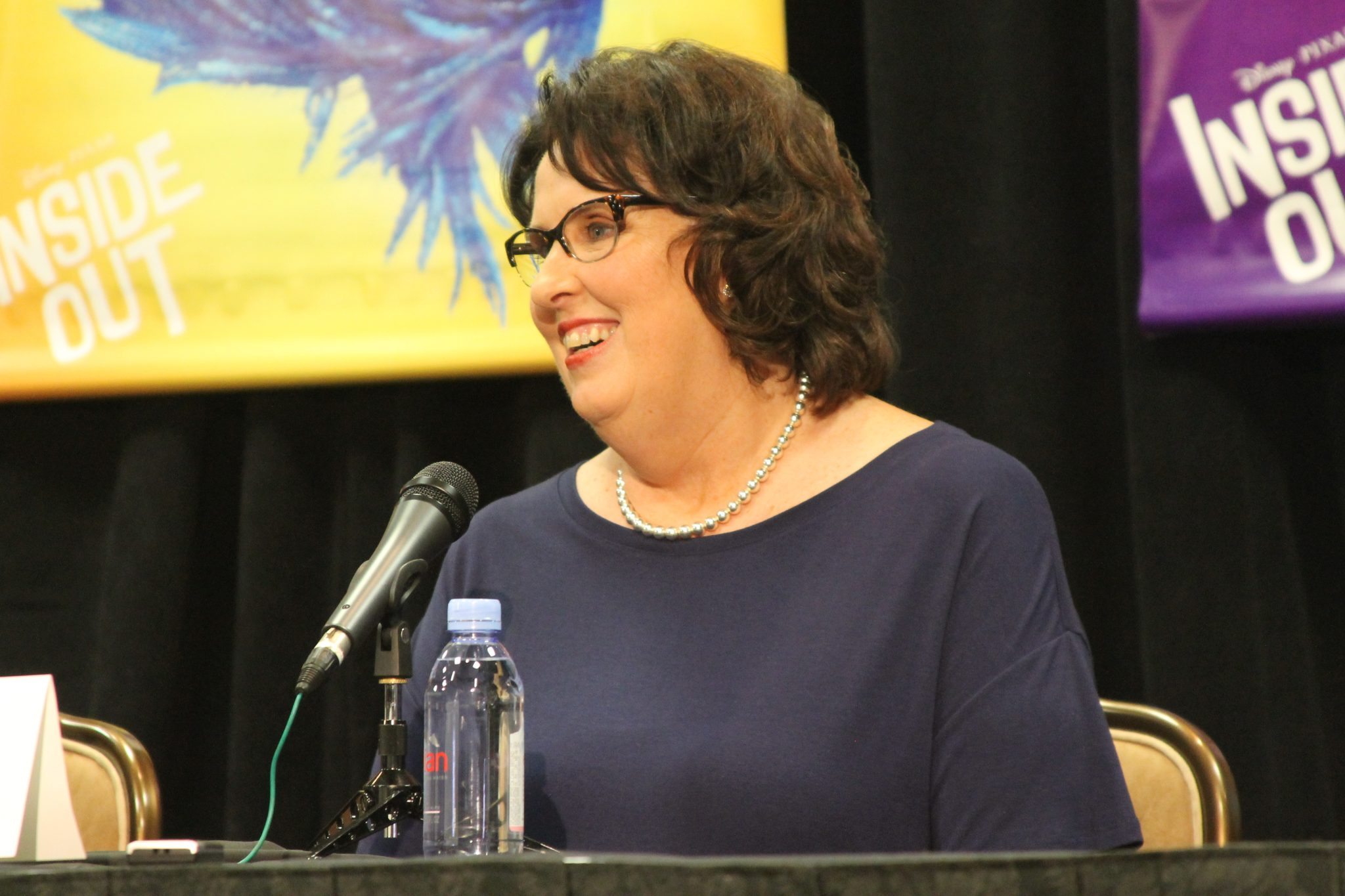 Phyllis talks about how excited she was to get the call and how she loved going to Emeryville and having Pete and Jonas tell her the story and see the pictures and that without a beat, she said yes. Then she said, “take it Bill.”

Anyone that knows Bill Hader knows that he is hysterical. Bill admits that in 2010 he might have done a wee bit of stalking and asked for a tour of Pixar. 🙂 He’s a huge fan in case you didn’t know. They wanted to come to SNL and he told them to come to SNL. They all hung out at “Saturday Night Live” for a week for reference of a sequence in the film that I’m not going to tell you. They asked him, “Do you want Fear?” and he said, “Sure.” It worked. 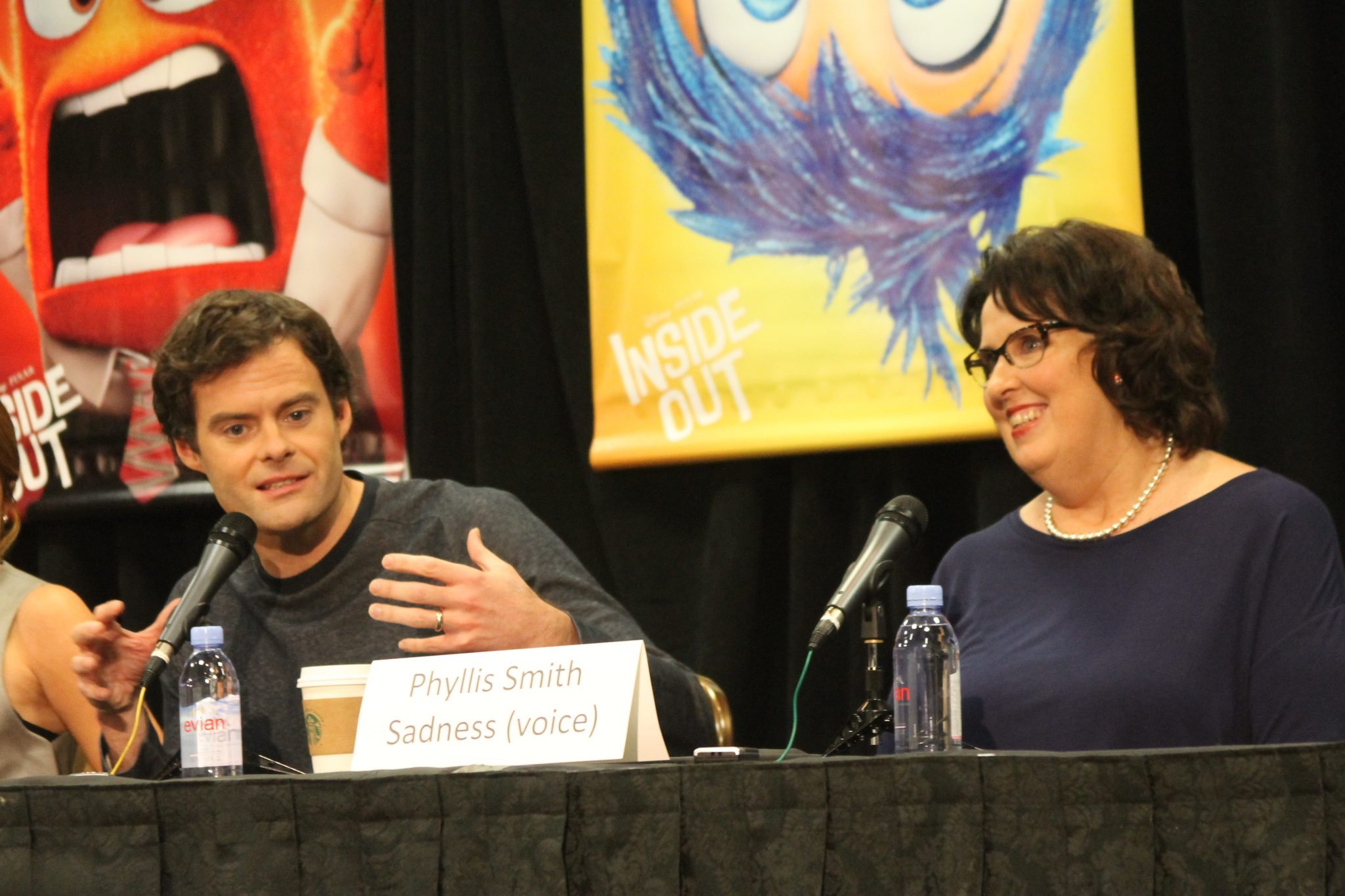 Then it went to Amy Poehler. She talks about how she came on later and she got a PowerPoint presentation and that she couldn’t believe the setting was the mind of an 11 year old girl. She said, “I came to the project later and they have done so much work already and a lot of people had already recorded, so I kind of got this PowerPoint presentation of what the idea was and I couldn’t believe it was – the setting was the mind of and 11 year old girl.  I just loved that that was the setting. I just thought – I honestly believe from the minute they told me the idea I was like “This film is gonna be the best Pixar movie ever made, and it’s gonna make the most money and it’s gonna win an Oscar;” that’s what I thought from the minute – I’m sorry but not to be – but from the minute they told me I was like this is the best movie ever made, and it will be the only good movie I’ve ever been in and I can’t believe I’m in it.  So I just thought about this day, I actually thought about the day when the film came out because as you can tell, I’m kind of a pessimist when it comes to these things.” 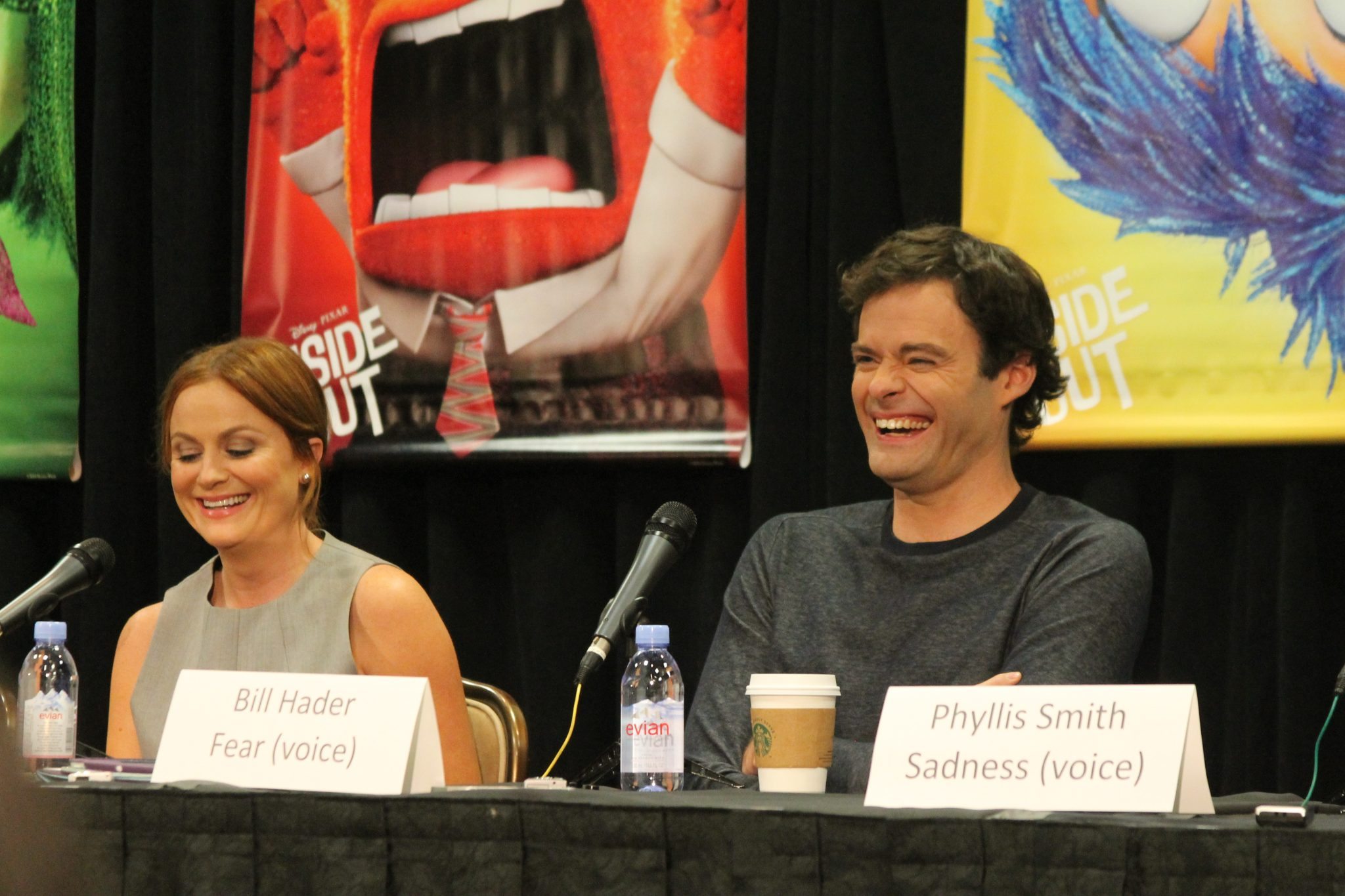 Let me tell you this people. She’s right. I think it’s Oscar worthy and I do think it’ll surpass “Frozen” as well.

Then it went to Lewis Black and I was totally in hysterics. Lewis talks about how he was the first one cast and that as soon as the rest of them heard he was in it, they couldn’t wait to be with him. Lewis then tells us, “But they did send me a box – I have to say they showed – you never see this in this city or really in this industry, but the humility that is really almost psychotic because they sent me a box of stuff with a letter in which they said that I may not know who Pixar is –which meant that they were crazy or they thought I was just some sort of a recluse.  So they said that they had this role of Anger –well, that fit – and would I be interested in it?  And maybe if I didn’t know them, then they sent me all their stuff; all these things that I’ve seen.”

Bill Hader gives a hold up wait a minute, they sent you their reel? Lewis tells us, “They sent me everything and a big nice book – I think I made out better than any of you and I leapt on it but they also sent me – and I’ve said before – they sent me about a 20 page kind of what they were thinking, a kind of a rough draft of the script and I thought and I read it and I said, “Oh my God, this is going to be a flop and I’m going to be in the worst thing that they’ve ever done and maybe they’ll be something to that in its own special way.”  Then I went out there and they’ve already done 12000 changes and I went “OH yeah you’re an idiot Lewis. And the rest –Like she said – this is crazy what’s going on here.” 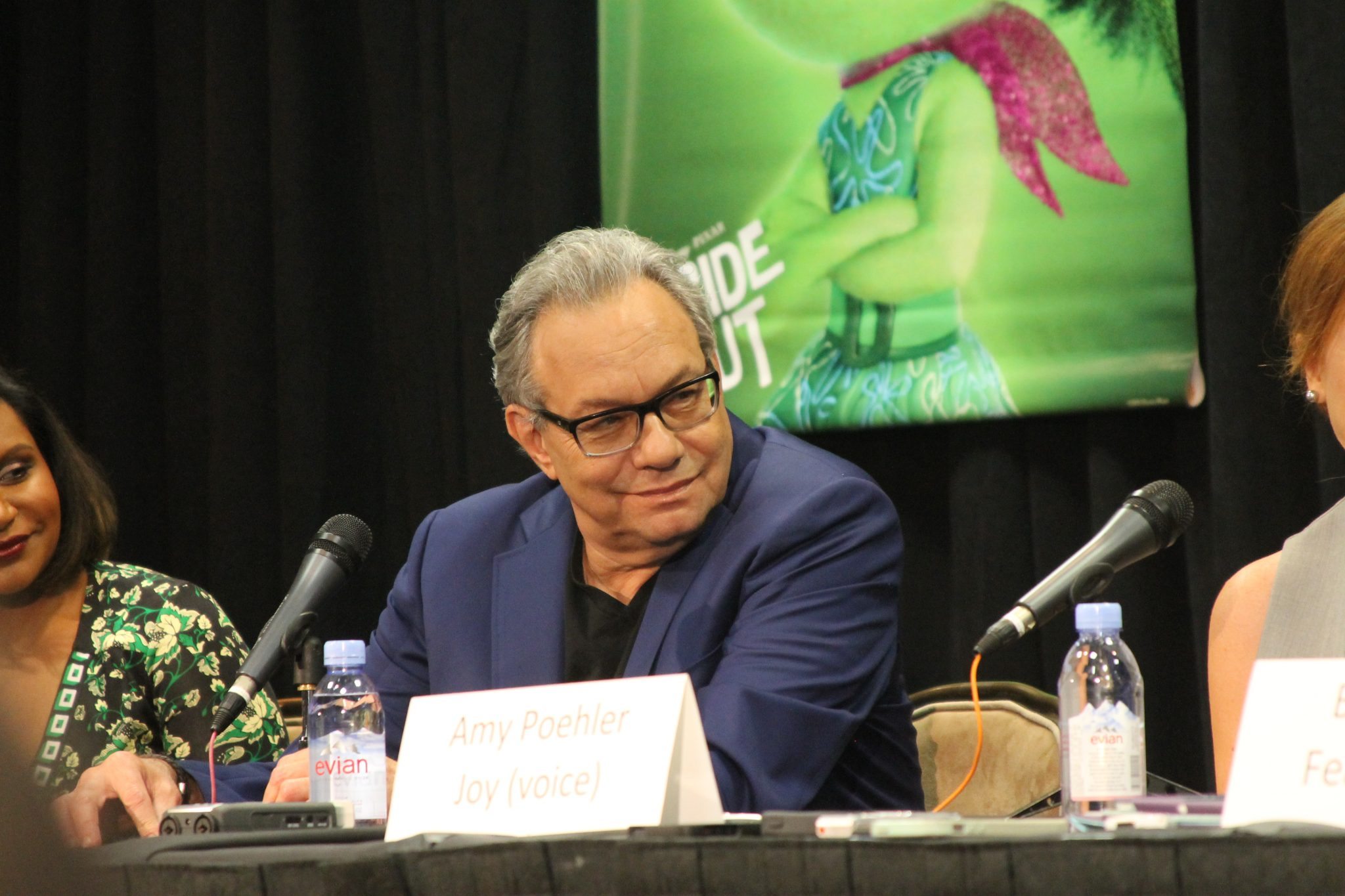 Then it went to Mindy Kaling who I was Disney Bound as during the screening, but as a nod to Bill Hader I wore Fear colored ballet flats. Mindy cracked me up so the conversation went like this.

Mindy Kaling: Well that is really true, it’s almost if Pixar and Pete and Jonas in the experience of working with them it’s like dating a guy.  It’s like this really well raised guy that doesn’t know he looks like Tom Brady and has the title of Tom Brady and it’s just like – and we did these other movies and we have these other things and you’re like “I’m in” like why didn’t I –

Amy Poehler: Totally, it’s like and I’m about your pleasure.

Mindy Kaling: Yes and I wanna just make you happy and you feel so honored to be with you and you say to your friends like – because they don’t have to be that way frequently, much less wonderful organizations teeming with talent treat you much worse and so you’re kind of like “This is great, how do I take advantage of this?  It’s really wonderful.”

Bill Hader: They act like it’s a real privilege that they get to do their jobs.  It’s like they can’t believe they get to do what they do which is really nice.

Mindy Kaling: Yes and I don’t know if that was so great – you know, a lot of the people hear we have to create our own opportunities or we enjoy doing that, being the orchestrator of own projects and to be part of something where you don’t have to, they want you to collaborate but you need to because the standard of excellence is so high, it’s such a treat.

From here they get into things that would spoil the movie so I’ll just summarize it for you.

Cast of “Inside Out” laughing hysterically at the press conference, except Mindy doing her Disgust face. LOL

Mindy Kaling talks about how she relates to her character because she sees Disgust as being a judgmental adolescent girl that’s very impatient and since she’s played that role over and over in her career, that Disgust says the things she wants to say on a regular basis but doesn’t or things she would say on a really bad day. Mindy said, “Basically, in my mind the parenthetical role or her lines is “I can’t, I can’t with this;” it’s just like what she’s always thinking.”

Lewis Black says he relates to his character because, “For me it’s just that I’ve spent – my family argued all the time, that’s what we did, that was the way we expressed love and it’s always been so – that kind of anger is always kind of being a part of me and my mother couldn’t cook.”

Amy Poehler said that she shares some characteristics like unrelenting energy and bossiness and that she sees Joy as a person that lives in the moment but, she thinks the characters in the film get all of the range of emotions. She says, “Everybody feels anger, fear, sadness, joy; each in their own journey.  Bill?”

Bill Hader says he relates to Fear, because he’s a big wimp. “I don’t know. I guess he needs to play Fear.” said Bill.

Then Phyllis Smith chimes in, “Likewise I’m just a mess and I’m a real sad sack.  I sit around and mope all day and I think they saw that effervescent side of me and decided to hone in on it.  No, it’s actually my insecurities that I think they – you know, those little quirks that I have – that Pete was able to glean out of me so – yes.” She’s so funny. Really she is. I love her.

The cast of “Inside Out” just seems to have the greatest chemistry and get along so well.

We also got to talk to Director Jim Murphy and Producer Andrea Warren after the panels about their short “Lava,” which plays before “Inside Out.” 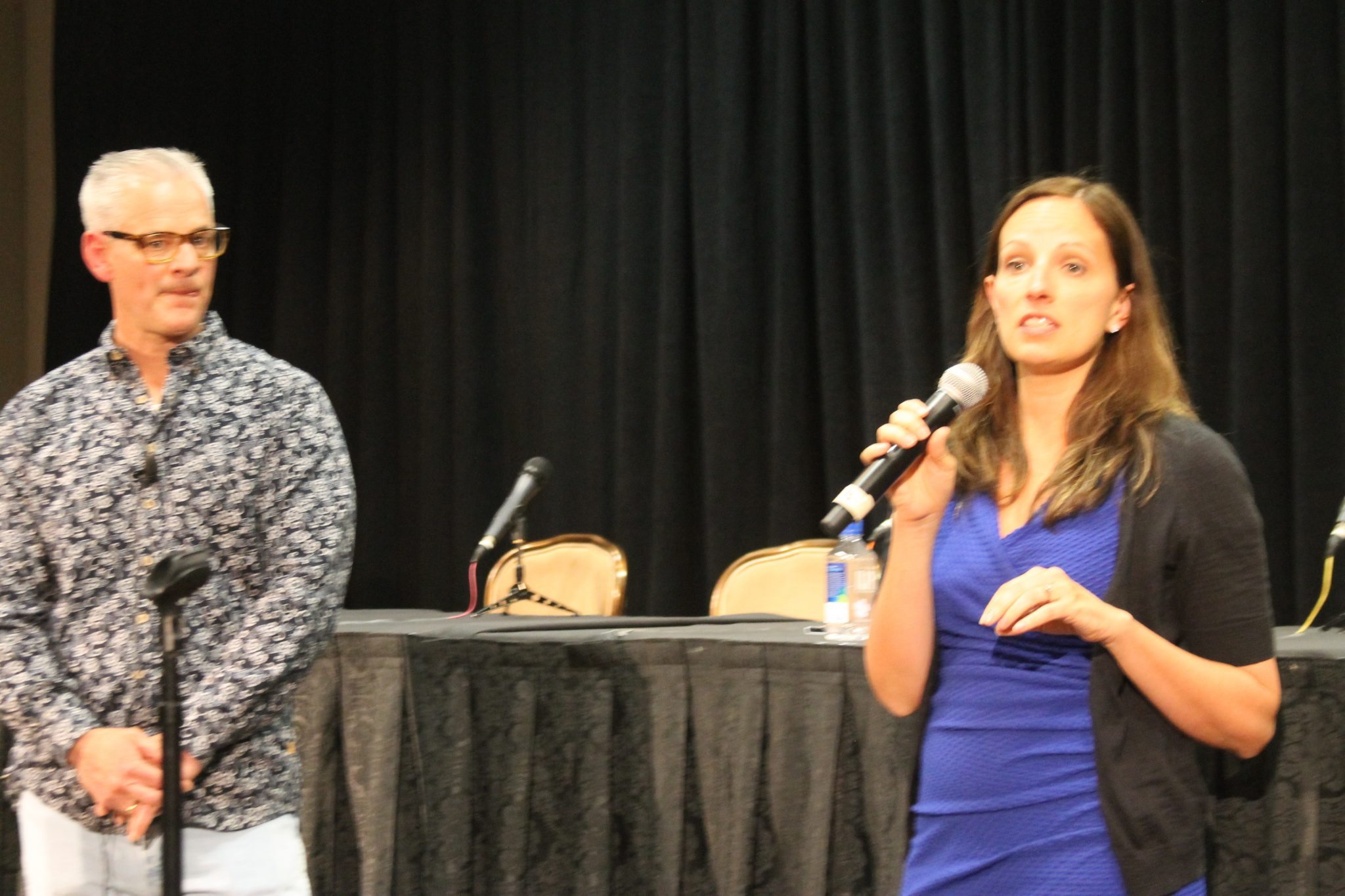 Beverly Hills, CA – June 7 – LAVA presentation at the INSIDE OUT junket with director Jim Murphy and producer Andrea Warren.

He talked about his long-standing love for Hawaiian music and culture and about his wife. He played a rendition of the song “Lava” that he wrote himself, which he details how he traveled to Hawaii and bought a ukelele and then learned to play it. You’ll get to see this lovely short right before “Inside Out” and you’ll want somebody to love you. 🙂

Meet one of the volcanoes. 🙂

“Inside Out” and “Lava” which are both rated PG, will be in theaters on June 19, 2015. You’ll love this movie from the “Inside Out” who ever thought one could love a movie that takes place in the mind of an 11-year-old girl that’s just moved across the country? Honestly, go check it out. It’s my favorite Pixar movie of all time. I even love it more than “Toy Story.”