“Inside Out” is the Best Pixar Movie Yet

“Inside Out,” is set inside the mind of an 11-year old girl and even after you’ve seen it, you’ll still be talking about how each emotion relates to you. Trust me when I say this, it will be more successful than Frozen. There is nothing cliche about “Inside Out” and I think anyone that can take emotions that you feel and animate what they look like is a true genius. Everyone has experienced what Riley experiences to some degree in “Inside Out” and parents can relate to Riley’s parents on an even deeper level. 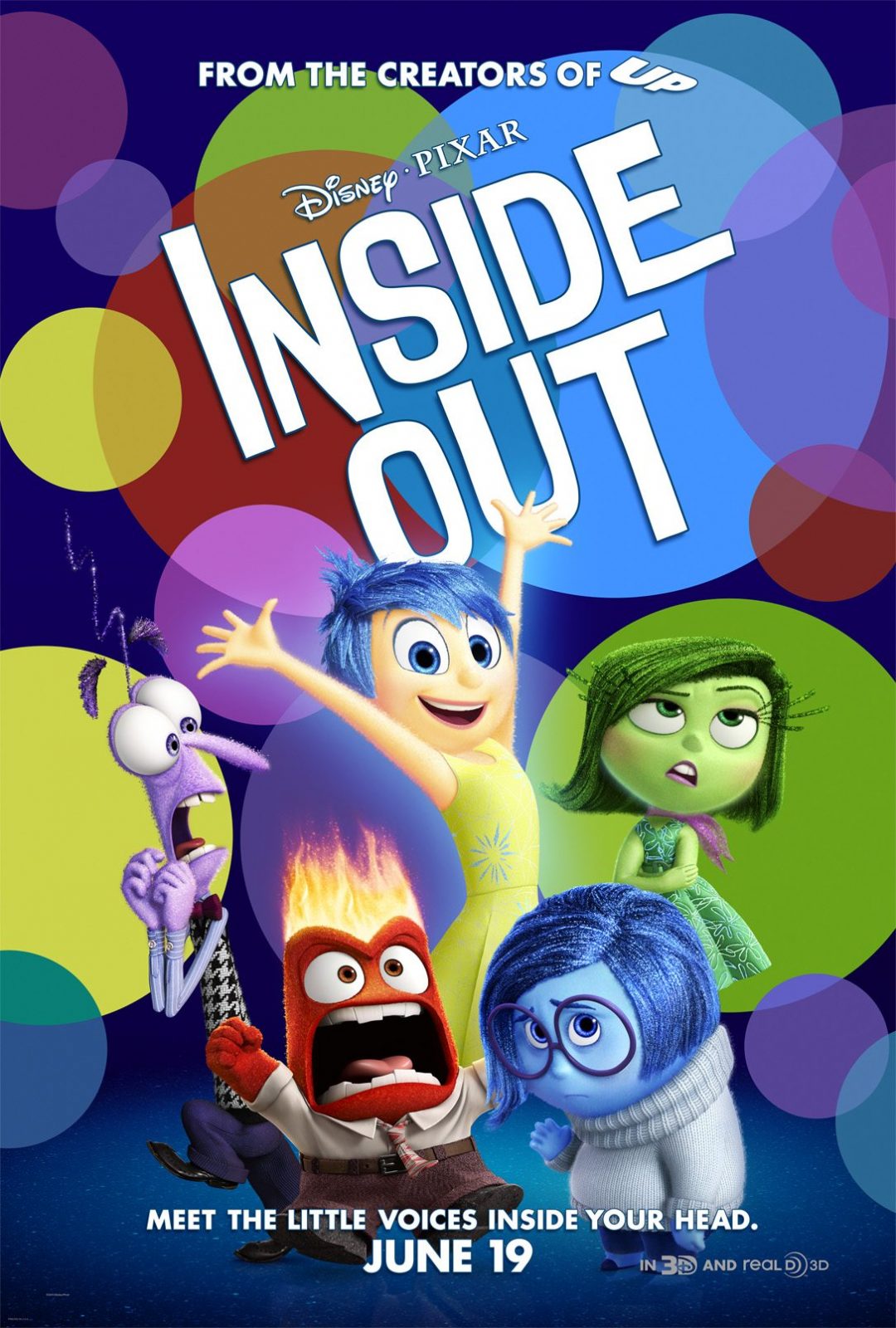 “Inside Out” takes place in the mind of young Riley (Kaitlyn Dias), who’s not at all happy about her parent’s decision to move them from Minnesota to San Francisco. Riley’s emotions are Joy  (Amy Poehler), a tiny fairy who is a wingless Tinkerbell; Sadness (Phyllis Smith), (my fave) who is plumper with a soft white turtleneck sweater, purple round glasses, blue and recessive; Fear (Bill Hader), is a purple bug-eyed character with a purple question mark for hair it seems; Disgust (Mindy Kaling), is broccoli green, and definitely has the cliquey vibe to her; and Anger (Louis Black), has a flat-top that looks like it’s on fire (looks like a mini torch really) with red skin, slacks, chunky tie and a short-sleeved shirt. There’s a control room with the mega console that the five major emotions use to control what’s taking place in the mind of Riley. Joy and Sadness seem to be the dominant emotions, but the other emotions are never excluded, not ever. Who ever is controlling the console affects the other emotions by what they are saying and hearing. 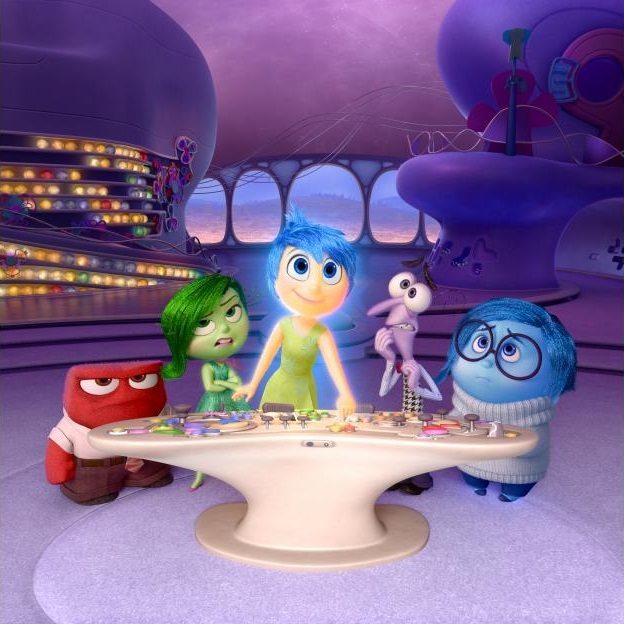 Memories are the size of a softball. As a fast pitch softball player in younger years, I personally thought that was genius. The color of the memory dictates whether the memory was Joy, Sadness, Anger, Fear or Disgust. Those memories are sucked through a tube system and further clarified as short-term memories, long-term memories, or not relevant and tossed into the unknown where it turns gray and disintegrates. Riley’s mind looks like a really large super flashy high rise with glowing softballs. Riley’s mind has several “islands” dedicated to the things Riley thinks about all the time. Riley’s core memories power the core islands  and each island reflects a different aspect of Riley’s personality: Family Island, Friendship Island, Hockey Island, Honesty Island, and Goofball Island. There is even a Train of Thought that glides through the air on rails that just form in front of the train and disintegrate behind it.

Things get interesting when Riley attends school on the first day of fifth grade and flashes back to one of those joyful memories that ended up being classified as sad the moment Sadness touched it and it causes Riley to cry in front of her classmates. Sadness has done this before. Nostalgia makes us do these things. We can be happy and sad at the same time. As Riley remembers Minnesota, she has sadness and joy at the same time. Joy and Sadness start to struggle and the core memories get sucked into the abyss along with Joy and Sadness who end up landing on the interior of the core memories. They must race to stop these core memories from being deleted and back at headquarters, you should be fearful, because Fear, Anger and Disgust are running the show. 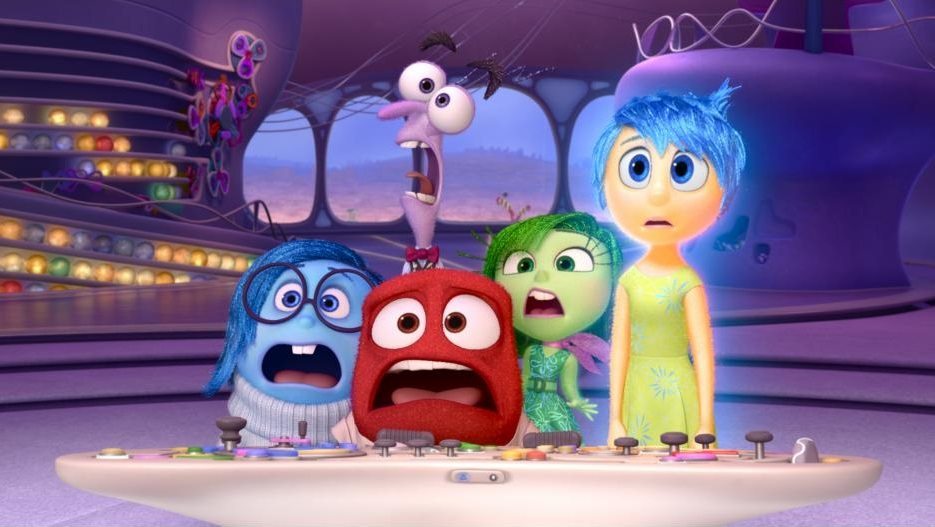 All of the emotions and characters are not something that can be expressed or put into words normally. “Inside Out’ is not just fantasy or science fiction, it’s a girl’s entire time as an eleven year old. That my friends is called reality. It’s an animated movie that looks like your life at 11. What 11 year old hasn’t got annoyed with her parents, stressed about the first day at a new school, or stormed off and slammed their bedroom door and started pouting? If you’ve got a kid that’s never done that, seriously what’s your secret? “Inside Out” is just an amazing animated film that could be based in reality. “Up” has sci-fi written all over it with a house floating attached to a bunch of balloons. “Toy Story” has fantasy all over it with talking stuffed animals and toys. And, I absolutely loved both of those movies. “Inside Out” has characters based on real emotions and it’s my favorite Pixar movie of all time right now.

The movie will show you what happens to Riley while she is in San Francisco and what happened to her in Minnesota, which is a parallel of fond memories, pain and confusing associations. While endearing, I promise you that you’ll be brought to tears when Bing-Bing (Richard Kind), when Riley’s imaginary friend that she’s not thought about in years does something extremely heroic for the one he pledged his allegiance to years ago. He’s got a cat’s tail, cotton candy body, elephant nose and sounds like a dolphin. He is all about goodness and he has a red wagon that can fly and as it flies it leaves a rainbow trail. Go watch the movie, I’ll just tell you I cried like a baby. I love you Bing-Bong. 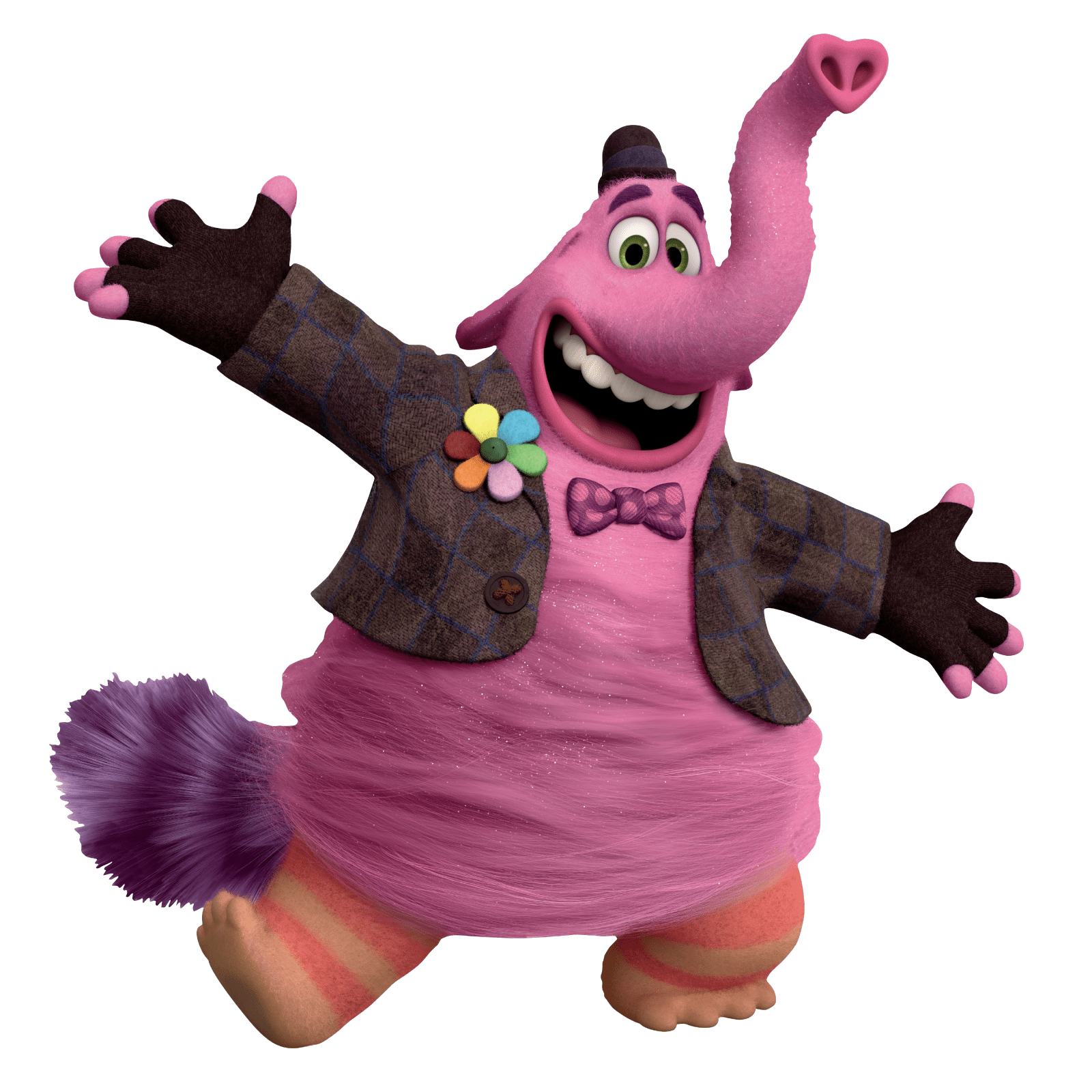 Pete Docter directed “Inside Out” as well as “Monsters, Inc.” and “Up”. The humor is understood by all from childhood to adults. Everyone will be laughing and all of you will be laughing for different reasons. My husband even laughed and if you know my husband, that rarely happens.

The scenes are so unbelievably funny. I still laugh thinking about the above scene. Clearly someone is a psychology major that worked on this film. I don’t know who, but they have to be. Don’t think that the overly bubbly and annoying Joy will be the main and only emotion. Soon you’ll realize just how much value all of the emotions contribute and do for Riley every day. No one emotion is more important than the other and they all experience the other emotions as well. There is a scene where Riley’s memory starts out so sad but, by the end it is happy. Your ending is where you stop. You can choose to make it a happy ending or choose to leave it a sad ending, but in the end we all have the choice to end our story how we want it.

The other secondary emotions to these main emotions aren’t said but you can see them through the movie. Joy can be looked at as happy, excited and fun. Sadness can be looked at as depression, heartache, etc. How the chose only five and those do seem to be our main core emotions is still amazing to me.

For those of you like me that feel that you can’t control your emotions only the way you react to them. “Inside Out” understand that even if you realize that you can’t control your emotions, only how you react to them, that it doesn’t make it any easier to do the right thing and ignore your emotions. Nothing is more maddening to a child then to be written off as being selfish and childish. No child wants to hear things like: It could be worse. You’re so lucky. While Riley is young, her emotions aren’t written off as being childish. You will be depressed for her while rooting for her to be happy again.

The moral of the story for me. “Don’t let your emotions drive you.” If Fear is preventing you from learning a new thing, choose Joy and do it anyway. If Joy allows you to be used and manipulated, allow Anger to help you stand up for yourself. Use the emotions together for a better you.

Now go see it today, because it’s worth waiting in line for and while I love Sadness, you wouldn’t want to make me sad. “Inside Out” is the Best Pixar Movie Yet and it hits theaters June 19th.