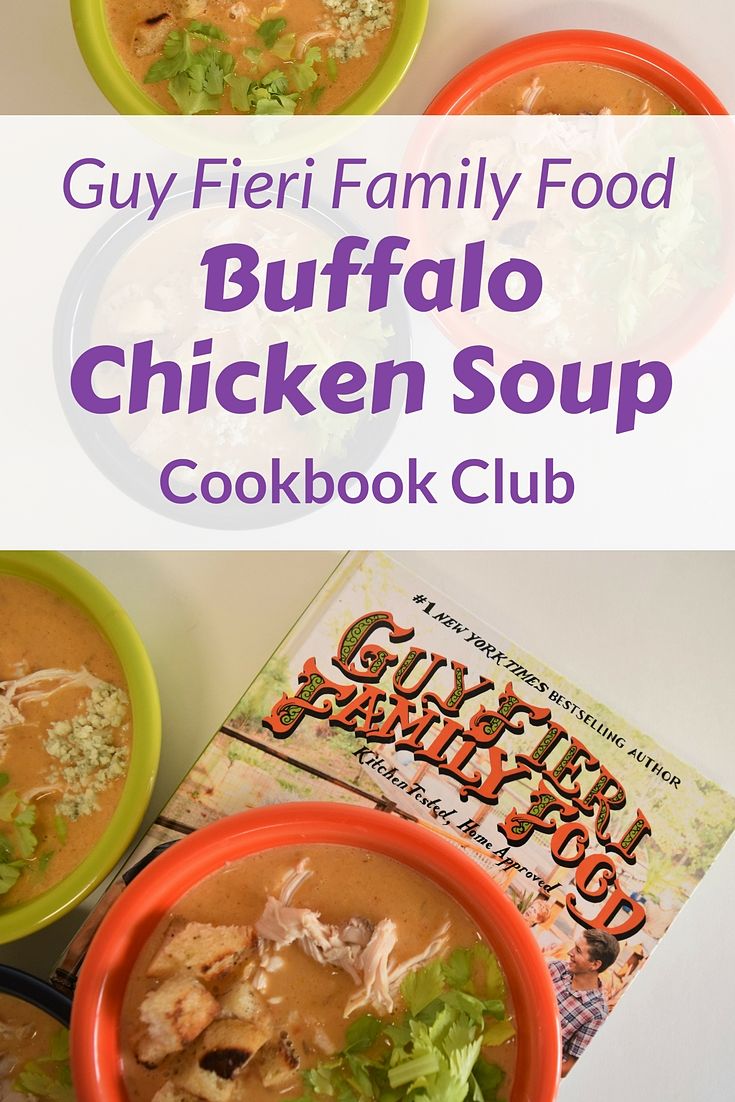 When your cookbook club decides to review a Guy Fieri cookbook, you might think, “wait, doesn’t he just visit diners?  So his cookbook will be greasy spoon right?”  Wrong!  Guy Fieri’s Family Food cookbook review was an evening of delicious and varying flavors that left me pleasantly surprised at  the ease of some recipes including the Buffalo Chicken Soup recipe I made.

The actual book Guy Fieri’s Family Food  looks pretty fun and totally follows the Fieri Brand.  Tatoo parlor font and green/orange color scheme that calls the desert cuisine to mind that he favors.  I personally feel every cookbook in the world should be spiral bound.  So I am just putting that out there to the universe again.  There are many gorgeous photos that call to mind Pinch of Yum and Smitten Kitchen (these trained chefs give a nod to the blog world sometimes).  Unfortunately, we don’t get a photo with every recipe.  And want a photo of every recipe.  Seriously it helps me decide what recipe I want to try cause I am a pinterest person. As this is a family cookbook, there are several candid (we know they aren’t really candid) family photos of them enjoying their food prep experience in happiness and joy.  And they look pretty legit, so maybe, just maybe they actually were cooking the food with a photographer along. 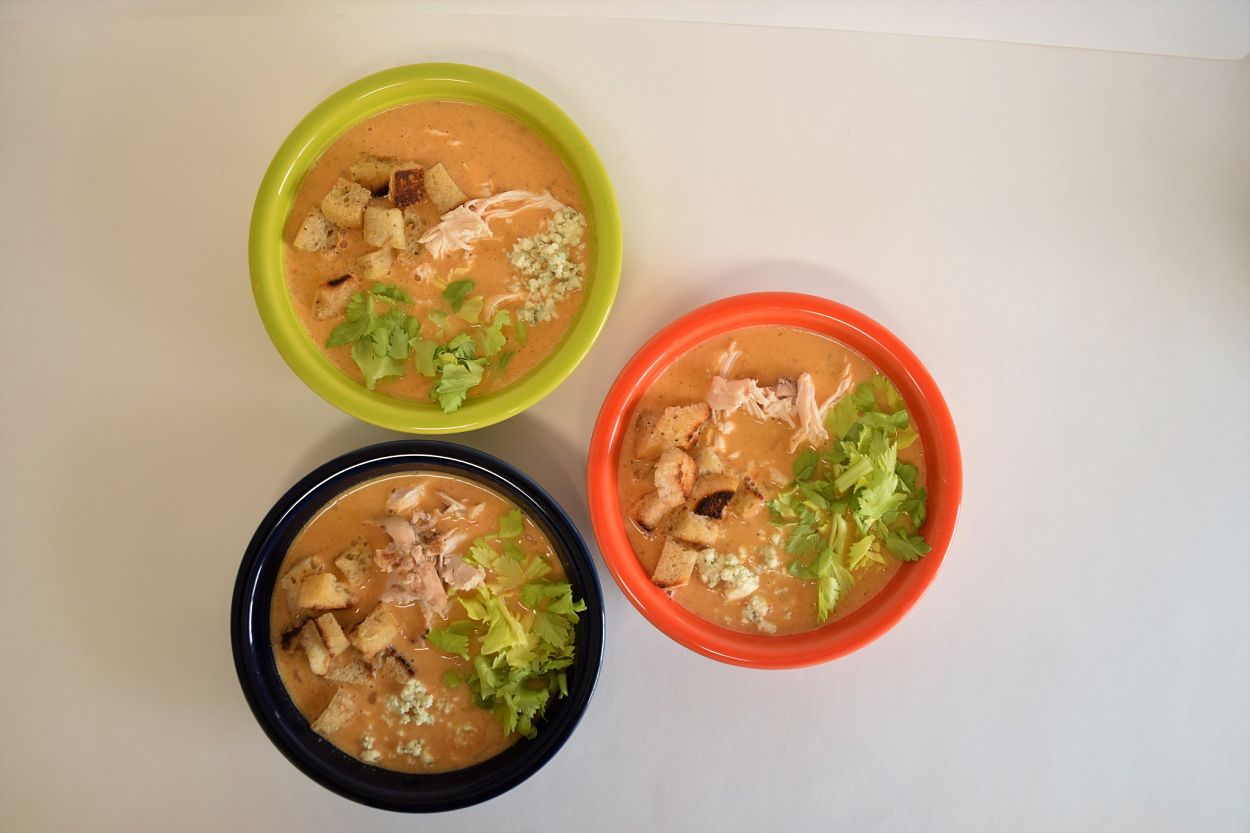 The topics for foods include:

There is a dual purpose section theme here, but that just a device of cookbooks to cover varying ideas quickly.  “One for the Week” is this great idea of a make once use all week.  But honestly the first recipe is loads of work and the rest of the recipes that week are a load of work too.  So it didn’t fit my mind of how to “once a month”  meal it.  The “All Hands on Deck,” section speaks to every family head that wants everyone to help in the kitchen and have a great time doing it.  IF you have the time and your family has the desire this could be a really fun section to try making copious tamales or kebabs.  Cause we all want to believe we can make dinner prep family time (I have yet to live that dream beyond cookie making in case you were wondering).

What I made: Buffalo Chicken Soup 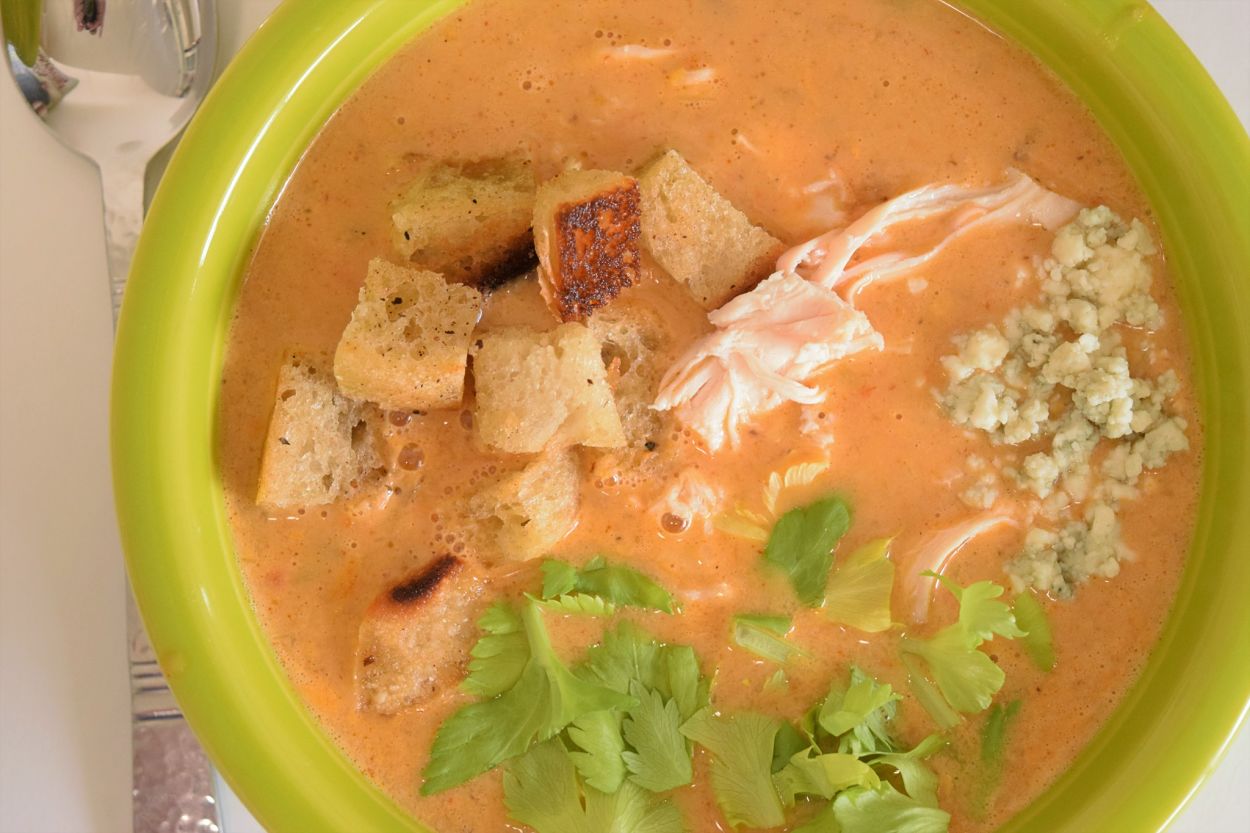 I was completely in love with the idea of making buffalo chicken wings into a soup. Sweet, spicy and maybe sticking all in one bowl.  Then I looked at the list of ingredients.  24-ingredients long!  Ugh, I was dreading actually making this since I had already told the club I would.  He lists this recipe as taking 50 minutes and I was doubtful of that.  In reality it took about an hour.  I was surprised.  I allotted myself 2 hours to make it and found I was going to need to keep things warm until serving time.  Easy enough with soup, thankfully.

Aside from being drawn to the recipe for the fun of soup-ifying buffalo wings, I noticed you get to make homemade crutons.  Ever since Pam Anderson’s Perfect Recipe Cookbook introduced me to pan toasted crutons I know they make any salad amazing.  I wanted to know if that extended to soup…..It does!

This recipe has great structure with a few minor mom-hacks I would make.  The veggies are diced and then purred in a blender.  Uh, if we are dirtying the blender make it do the whole job, roughly chop.  Why is the chicken added to the bowls and then the soup?  Dump it all together, even distribution just doesn’t matter to me.  Too many “for serving”  items:  bleu cheese, celery heart leaves, sour cream, green onions, and celery seed.  If you happen to have them all awesome, use them.  But the last three are totally unnecessary.  Or if your kids are like mine and hate bleu cheese, have the sour cream instead but not in addition.

Guy takes the chef method of no-hacks cooking.  He even has stock making recipes.  I didn’t make my chicken stock.  I am not convinced it tastes soooo much better.  Especially when you are adding Franks Hot Sauce to the mix.  Broth flavor heavy recipes could be another story.

Will I make Buffalo Chicken Soup  again?  Most definitely! 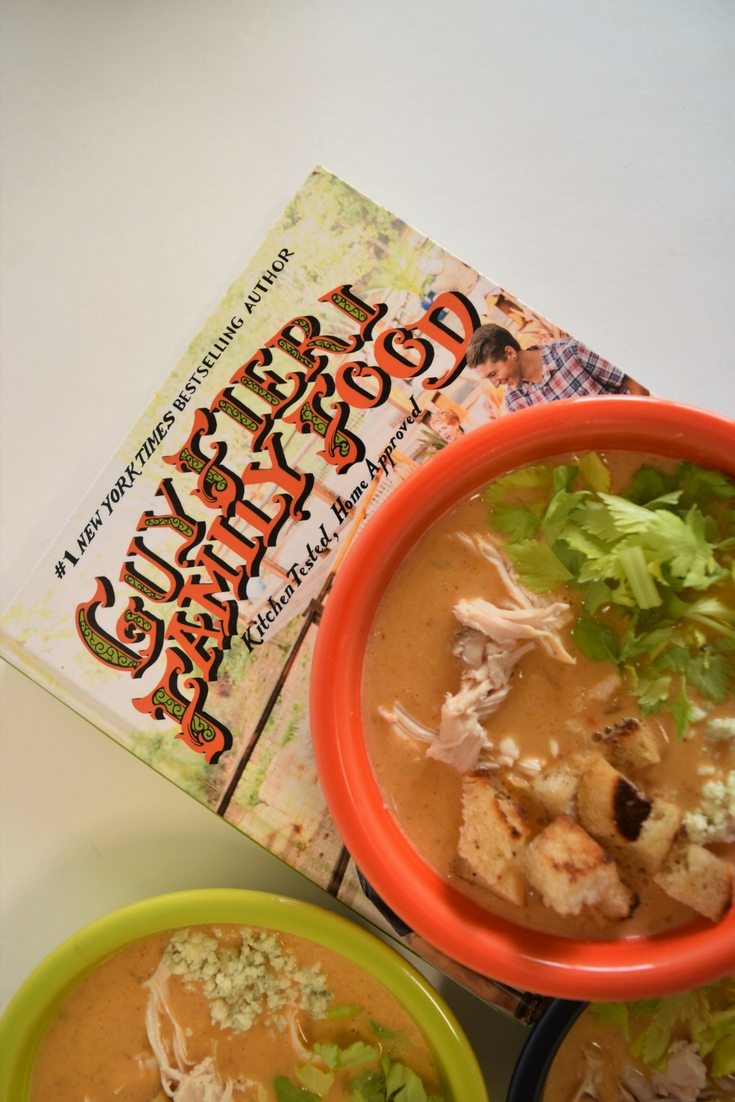 What everyone else made

These tasted really good.  The slaw on top was kinda sweet, but don’t sy away from that.  The sweet balances the spice of the Tikka Masala

This is a lot of work, as all real cheesecake is.  It takes a spring form pan.  So special time and special equipment.  It seems odd to have potato chips and pretzels on top, but the sweet-salty combo makes your tastebuds sing.

Crispy Artichoke and Arugala on Foccacia

Not your average sandwich.  It has a little bit of kick from the pickled vegetables.  We tried it with and without the Guy Fierei’s pickled veggies.  So much better with.  And that rosemary foccacia gives off the best smell to wet your appetite.

A simple basic meal.  Our test maker skipped making the chili verde sauce from scratch.  She just didn’t feel it was worth her time.  And in the end we all liked the recipe anyway.  But it’s hardly one that is unique to this book.  It alone would not convert me to getting this cookbook.

I have to admit that this was one I tried after cookbook club.  And it was Ah. Mah. Zing.  It’s more work than the average instant pot recipe.  With several pre-pressure cooking steps.  I don’t particularly like that, but I really liked eating it.  Effort = reward.

Flavorful, unique recipes
Most recipes are under an hour to prepare
Cool section to get everyone involved